By the time you see this we’ll be back in “civilisation” so to speak. We’ve had a wonderful trip, experiencing

And we’ve learnt a lot, though how much we’ll retain remains to be seen.

Today our group was divided into 2, with one group doing the Bush Tour with Lodge Manager Leith and Traditional Owner (TO) Franky in the morning, and the other boating on the Arafura Swamp, and then switching for the afternoon. We were in the bush-first-water-second group.

The bush tour involved our driving from spot to spot with Leith and Franky, getting out at each for Franky to tell us a story about the place in language, followed by Leith telling us what Franky said. It was great fun, with Franky becoming increasingly animated and responsive as he saw us enjoying his stories, and Leith adding his own droll touches to his translations (which I believe, from his smiles, Franky understood.) It was great hearing the stories in language. I should say that the word “story” here is not to be taken lightly, because “stories” are how indigenous people see, learn about, understand and interact with their world. A bit, perhaps, like our Bible stories except for indigenous people they are all-pervasive.

First stop, Franky told us several stories about the cathedral termite mound, made by grass-eating termites (Nasutitermes triodae (?)), including how his people use broken off bits of termite mound to fire their ovens. As Leith said “what Franky has just told you was how they make BBQ beads!”

Next was a Milkwood Tree (Alstonia actinophylla), also known as the carving tree because the wood is soft. It also provides bush glue – we tried it and it is sticky. And it was the wood used to make the dug-out canoes as taught to them by the Macassans. Northern indigenous people had not made dug-out canoes until the Macassans taught them.

Franky told us about:

Our penultimate stop was at an area comprising some of the main locations for Rolf de Heer’s film, Ten canoes.

Plants here included the Freshwater Mangrove, used for crocodile hunting and cooking, Pandanus for string making, and Paperbarks (Melaleucas). While Leith was translating, Franky wondered around the billabong calling out to his min min (the Sulphur-crested cockatoos, or message birds.)

Franky demonstrated stripping Pandanus leaves to make the grass for weaving. He also demonstrated various uses of the Paperbark – too numerous to list here. But, for example, they make a dish from which they can drink, or use the dish to carry honey on their heads. As Franky demo’d this, Leith said “Franky is demonstrating what he learnt at finishing school.” Franky’s smile here was infectious.

Frankly demonstrated ochre painting on his arms, using an ochre rock, some water, and a quickly home-made brush – so quick, so easy (if you know what you are doing.) He also told us about Dogs Balls (Grewia latifolia) plant and its bush medicine uses. Another popular name for it – Dysentery Bush – gives you an idea of some of its uses!

Franky was a real character. At the end of each stop he would instruct us to get into our respective vehicles and “lemonay” (phonetic spelling), essentially telling us to “hurry up and let’s go.” He has had his health and social problems but he clearly loved sharing his knowledge and country with a responsive audience. The knowledge we’ve gleaned during the trip is great, but even better has been meeting and talking with indigenous people on their terms. We balanda (white people, coming from “hollander”) felt a little uncertain in our communications:

but it has been great to be able to ask indigenous people specific questions about what we’d seen, such as “how do you do x?” or “who taught you y?” Or even “are the young people interested in z?”

Then it was back to the restaurant for lunch , which was Buffalo Red Curry or a Chicken Salad. Delicious. Most lunches were wraps (particularly while out and about or on the road.)

We caught one croc sunning itself on the banks and we saw four or five (the number varied for different members of the party depending on the timing of their spotting!) slithering into the water as they heard us coming. We also saw a buffalo hiding in the vegetation by the bank. 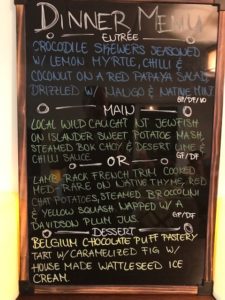 The beautiful Corypha elata (or Corypha utan) Palm  – or Cabbage Palm, which is endemic to this region, was pointed out to us. Its shape is a little reminiscent of young baobab trees.

On this tour, Johnny let Phil do most of the talking, but answered specific questions, such as how he kills crocodiles. His system – harpooning – was a little different to Franky’s (trapping with meat attached to rope).

Again the entree and two main course dishes (Jewfish or Lamb rack) were both gluten and dairy free. How sensible of them. I don’t think the non-dietaries suffered for the absence of those nutritional staples. My rack of lamb was delicious.

Dessert was chocolate puff pastry and home-made ice-cream, but I had a very lovely fresh fruit salad.

In the bush with Franky (TO) and Leith

On the swamp with Phil and Johnny (TO)